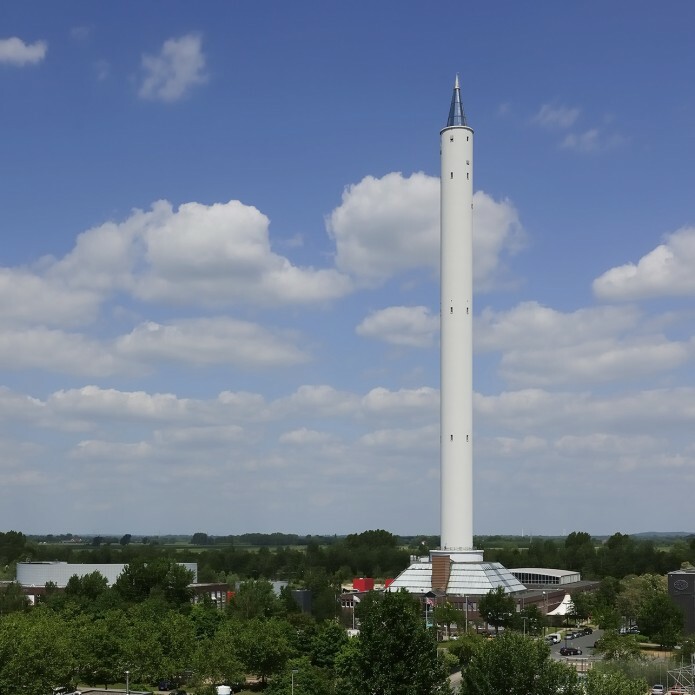 First of all, I want to clear up a rumour – there’s no restaurant at the top of the tower. The good news is that the tower occasionally opens its doors to visitors. Since June, for example, couples can get married at the top. But otherwise, access to the tower is usually restricted to staff at the Center for Applied Space Technology and Microgravity (ZARM), who use it to investigate weightlessness. But what is weightlessness exactly? 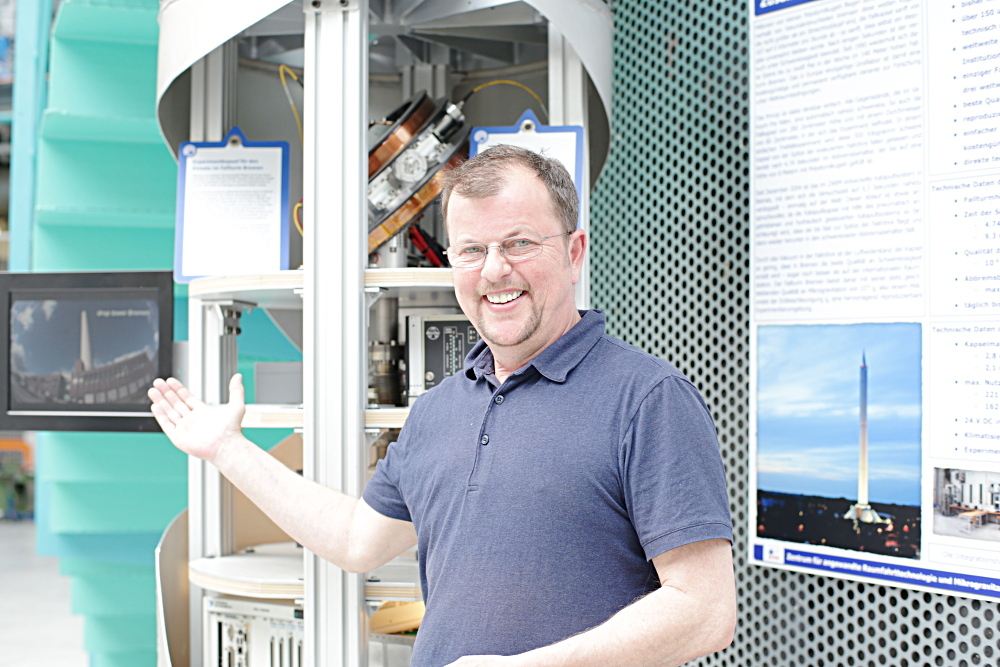 Tour guide Mikka Pilath explains what ZARM does in a fun and accessible way (behind him is an example of a drop capsule). © WFB

A guided tour of the Fallturm drop tower explains this phenomenon through accessible experiments and examples from daily life. Here’s one that many are familiar with:
You’re strapped into the seat of a dizzyingly high free fall tower at a fairground. The drop is only seconds away. Suddenly, you shoot downwards, and only the shoulder restraints prevent you from waving good-bye to your seat. The power of gravity, which normally keeps your body pressed into your seat, is suspended for an instant. Your body is weightless.

Bremen’s drop tower can recreate these conditions for around ten seconds, up to three times a day. This allows scientists to study how liquids and substances behave without the influence of gravity. Imagine an astronaut in space trying to drink from a cup – that’s not going to work. So it’s good to know these things beforehand.

A look into the drop tube (left): the experiments take place in drop capsules. They are prepared in the integration hall at the foot of the tower (right). © ZARM

To carry out the experiments, a capsule is dropped inside the tower’s 110-metre-high drop tube. The air inside the tube is pumped out beforehand, creating a vacuum that ensures the capsule’s drop is smooth. A state of weightlessness is created during the drop, just like with the fairground’s free fall tower. The capsule, which can reach speeds of up to 167 kilometres per hour, lands in a large container filled with polystyrene pellets. 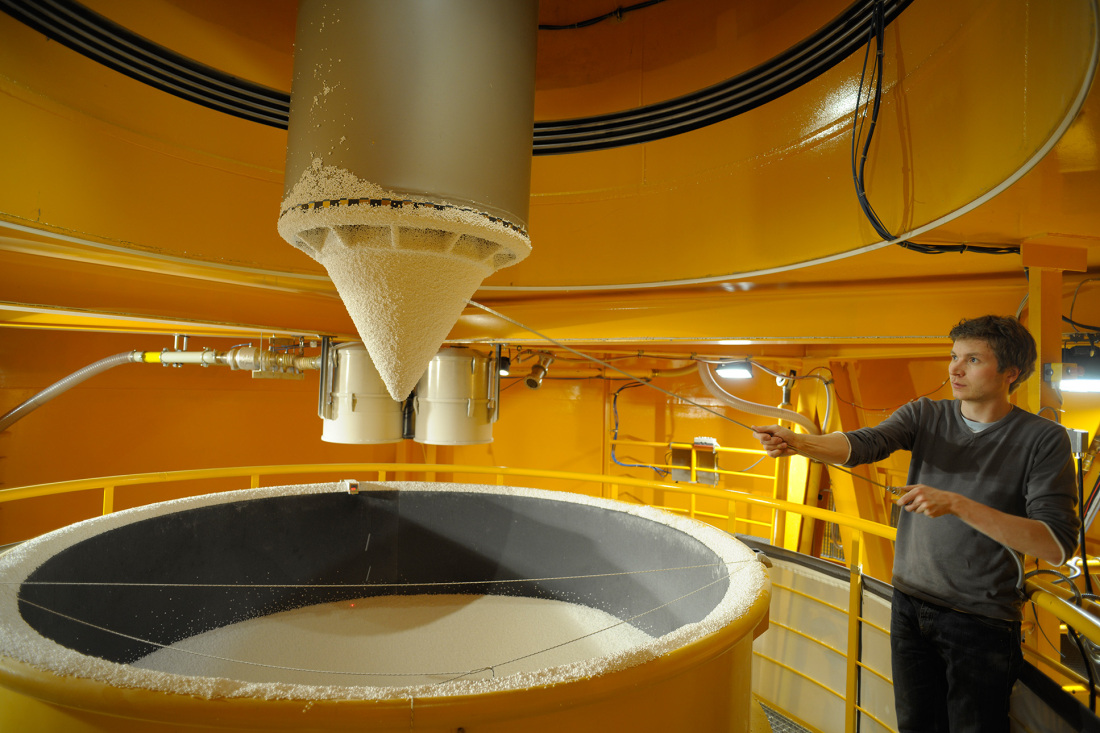 Scientist recover the capsule after a drop, which can reach speeds of up to 167 km/h, from a deceleration unit filled with tiny polystyrene pellets. © ZARM

The drop only lasts 4.74 seconds, during which the scientists remotely carry out their experiments in the capsule. A catapult, installed in 2004, allows experiments to be carried out in the other direction too, doubling the length of a drop experiment to around ten seconds. 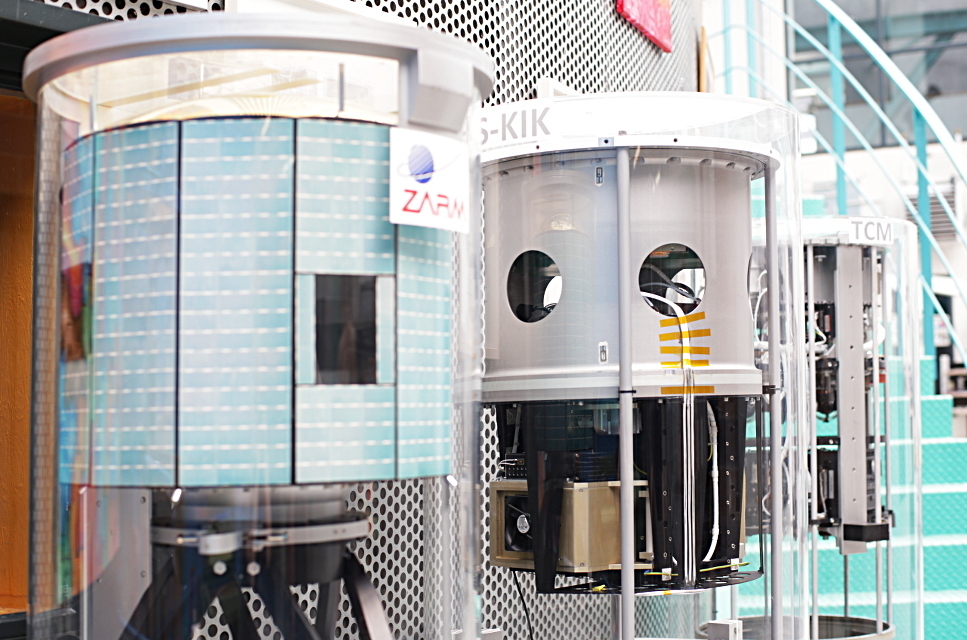 The integration hall has a small area dedicated to satellites that have already flown in space. © WFB

Since the Fallturm drop tower was completed in 1990, around 400 experiments a year have been carried out by researchers from the fields of process engineering, materials sciences and biology. The capsules are prepared in the integration hall at the foot of the tower. Unfortunately, taking photos isn’t allowed here, in order to keep the experiments secret. So there’s only one thing for it – come and see for yourself. Group tours can be arranged through ZARM or Bremer Touristik-Zentrale.

If you want to find out more about space travel, you can join Bremen’s guided space tour.