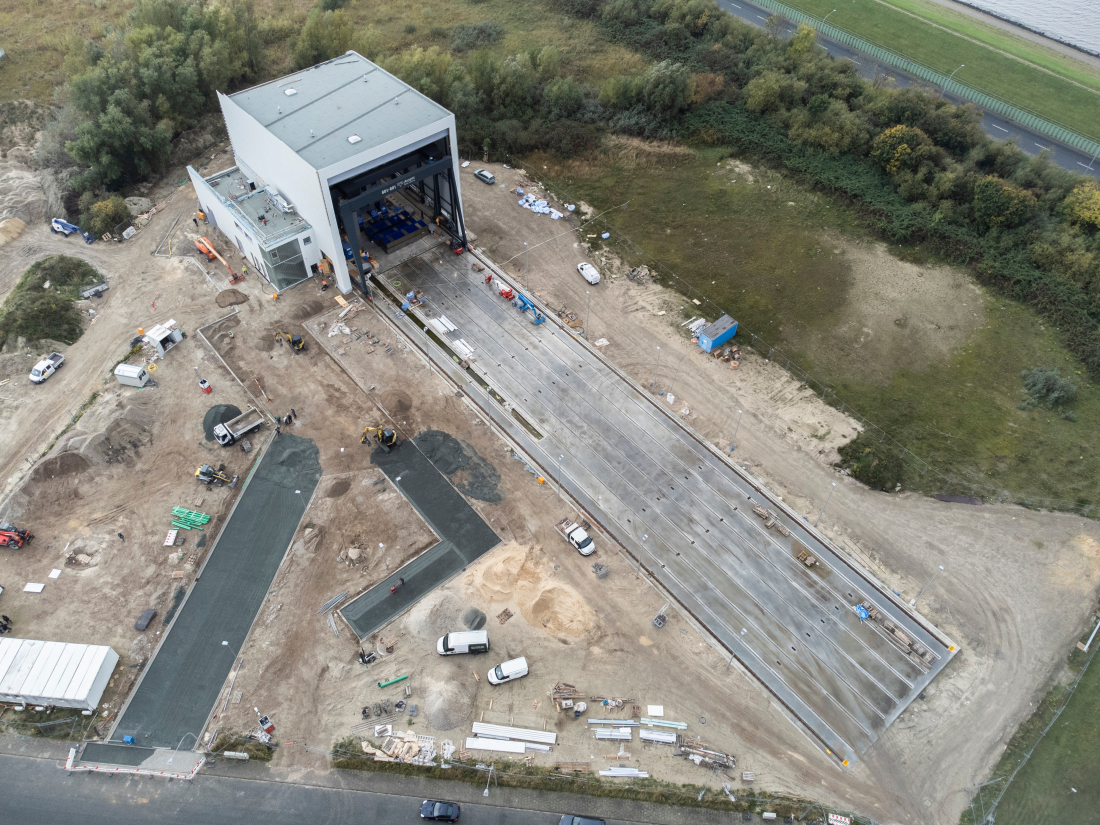 As long as a football pitch and weighing as much as ten African elephants, they are an essential part of climate-neutral power generation: the rotor blades of the next generation of wind turbines. To ensure they can generate electricity for the world throughout the coming decades, the "wings", some of which are over 120 metres long, will literally be tested to destruction in Bremerhaven. This is where the IWES research institute, the Fraunhofer Institute for Wind Energy and Energy System Technology (Fraunhofer-Institut für Windenergiesysteme), is building what is currently the largest rotor blade test facility in the world.

It's a breath-taking sight. A rotor blade, which itself is several dozen metres long, floats horizontally like the wing of a jumbo jet within the confines of the gigantic hall. A multitude of bolts attach its "big end" to a massively solid block. A vertical mechanism bends the free-swinging point of the blade, which is below the block, up and down several metres, in a calm and regular tempo. "We've been doing this for more than a year now", said the engineer, Dr. Steffen Czichon, as if it were the most commonplace thing in the world. It is in this hall, and in another, that the Fraunhofer IWES in Bremerhaven tests and certifies the endurance and reliability of rotor blades (some of which are currently up to 90 metres in length) for the largest wind power plants in the world. By building a third test facility right next door, the Institute is preparing itself for the next major step in the future of climate-neutral electricity generation. "We'll be able to test blades that are more than 120 metres long in the new hall", said Dr. Czichon, Head of Rotor Blades at the IWES. 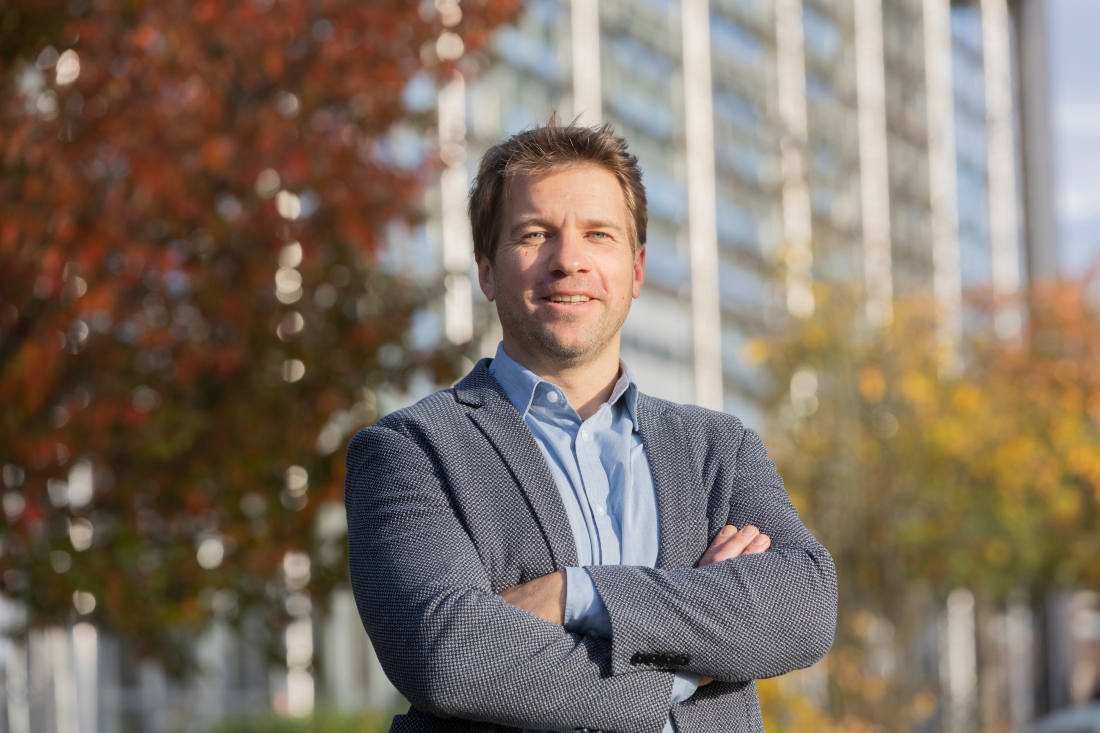 "Rotor blades are supposed to last 20 to 30 years and are exposed to enormous stresses during this time," says Dr. Ing. Steffen Czichon, who heads the rotor blade department at IWES in Bremerhaven. © Jörg Sarbach

Fully prepared for the surge in demand for rotor blades

Within just a few years, wind power has become one of the main contributors to Germany's energy supplies. A walk around the IWES premises in Bremerhaven makes this abundantly clear. The first test facility, which could handle rotor blades up to 70 metres long, came into operation here in 2009. A mere two years later, as blade lengths had already increased to 90 metres, the IWES kept pace by opening its next-largest test facility in 2011. In recent years, the energy industry has focussed on improving the performance of wind turbines and generators, and the IWES has contributed to this by constructing a unique large-scale test facility for the nacelles (machine cabins). The very latest wind power plants can now achieve outputs of 15 megawatts. The next surge in demand will be for rotor blades. "To put it simply, the larger the rotor surface area, the more wind it can catch and therefore the more electricity it can generate", pointed out Dr. Czichon.

Rotor blades are subjected to exceptional stresses and strain over decades

The decisive factors in the long-term economic success of climate-friendly electricity generators are the length, and also the durability, of rotor blades. This is where the work performed by the IWES, which like all the other Fraunhofer Institutes focusses on applied research, comes into its own. "We use our test facilities on behalf of the wind power industry, to test whether the rotor blades meet the data and expectations of the developers, in practice", explained Czichon. The experts in Bremerhaven are primarily interested in the material properties of the blades: as Czichon added, "they must last for 20 to 30 years and withstand enormous stress and strain over this time". In addition to their own weight (which can be between 50 and 60 tonnes), the blades must also be able to handle the tremendous levels of torque and flexion cause by the strength of the wind. "It's not only the connections that have to withstand this: the entire structure of the blade is also affected", stated Czichon. 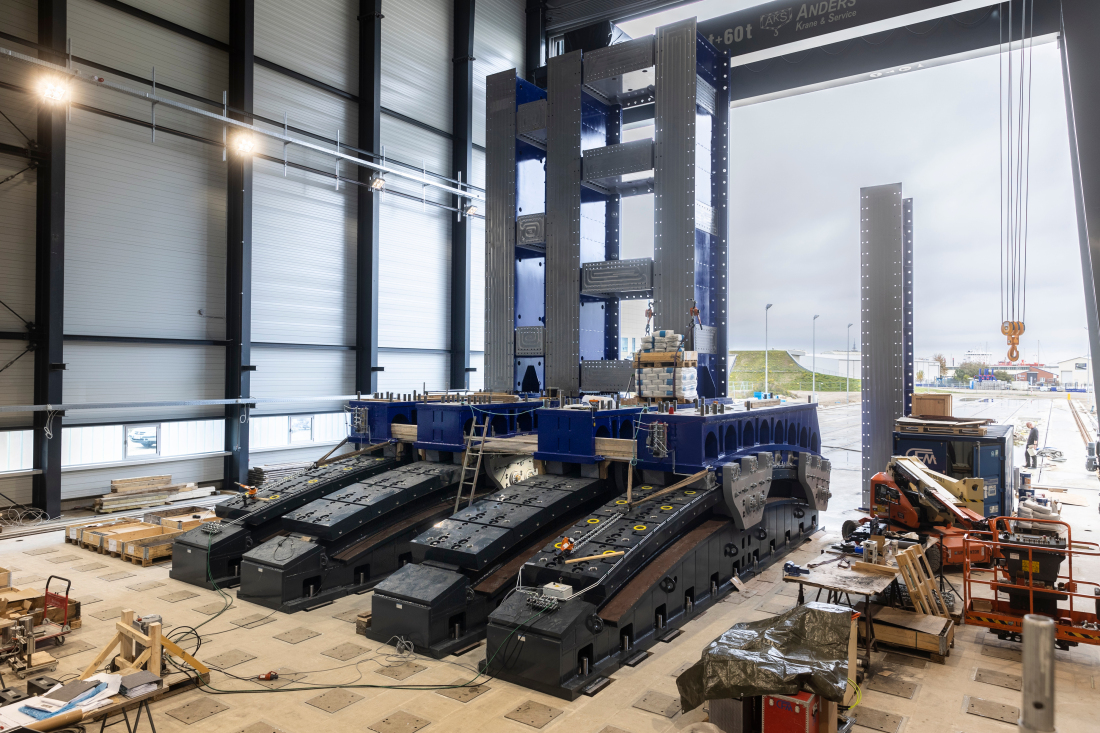 To ensure that they can supply the world with energy for decades, the rotor blades are literally tested by hook or by crook in Bremerhaven. © Jörg Sarbach

It is possible to calculate whether the laminated structures of the blades, manufactured from laminated fibre composite materials and resin, can handle these extreme conditions, in theory. However, certainty can only be achieved by practical testing, for which the IWES in Bremerhaven has developed its expertise and its infrastructure. Patience is the main quality required at all the large-scale test facilities (which will soon number three). As Czichon explained, "We simulate the entire life cycle of a rotor blade in the tests – although at a greatly accelerated pace". In practice, this means that a rotor blade must sometimes be flexed up and down several million times. "It's entirely possible that this type of test will run for a year or more", said Czichon. A rotor blade won't achieve the certification that will approve it for series production and actual use until all the tests have been performed and evaluated. However, interim results enable the customers to set up an initial prototype of their new wind power plant and also to try out the entire system (the tower, machine cabin, rotor and generator) in real life.

The technical equipment in the new test facility gives an inkling of the forces at work in the tests performed in Bremerhaven. The steel block used to secure the rotor blade flange weighs a good 840 tonnes on its own. The IWES experts drew attention to one of the particular features of the test facility, saying "If the blades become longer and heavier in future, we'll be able to attach additional pieces of steel to reinforce the block". And here's another innovative element: "Rather than being attached directly to the block, the blade is fixed to a rotary plate, so we can simulate the wind loads from different angles without having to spend the time and effort reinstalling the blade." The 19 million Euro test facility is also designed so it can be modified to handle even longer blades with comparatively little additional work. Czichon is convinced that "even larger facilities will be required, in view of the rapidly increasing demand for clean energy". The rotor blade testing facilities currently under construction have received funding to the tune of 14.8 million Euros from the German Federal Ministry for Economic Affairs and Climate Action (Bundesministerium für Wirtschaft und Klimaschutz (BMWK)) and a further four million Euros from the German Federal Ministry of Education and Research (Bundesministerium für Bildung und Forschung (BMBF)), the Federal State of Bremen and EFRE (European Regional Development Fund). 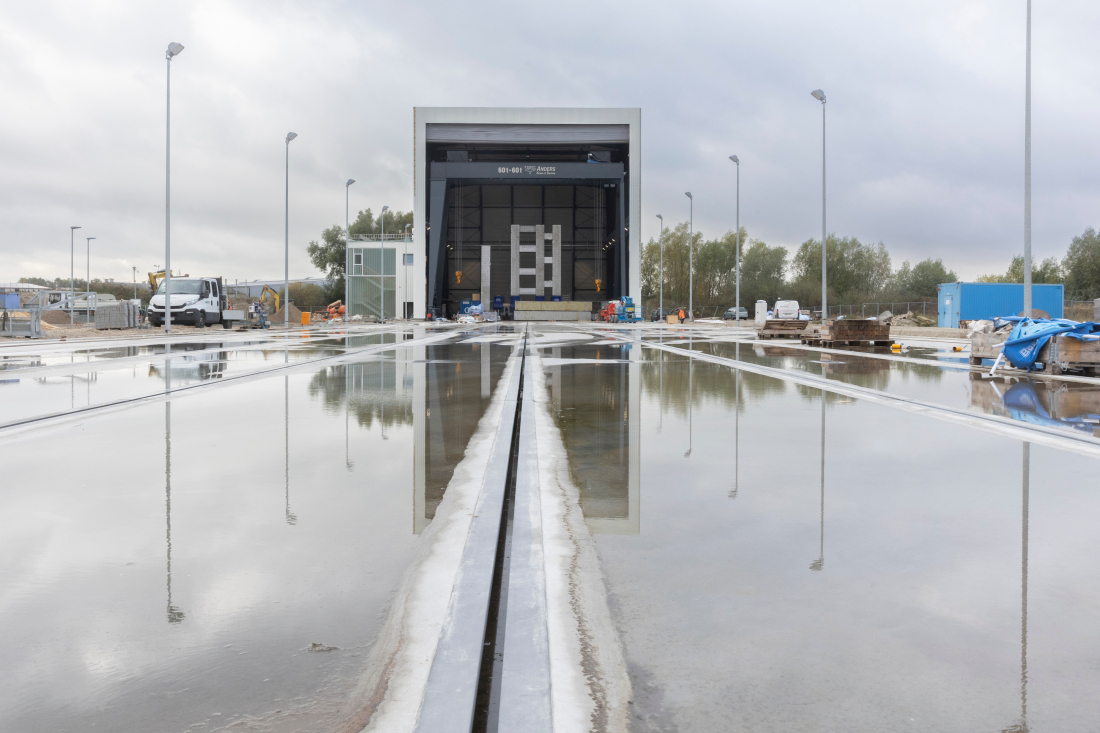 Rotor blades with a length of more than 120 metres will be tested on the new test stand at IWES in Bremerhaven. © Jörg Sarbach

Although construction work at the facility in Bremerhaven is not yet complete, one thing is already certain: its very first job will be a superlative task. Vestas, the Danish wind turbine manufacturer, will have a 115.5 metre-long XXL rotor blade for its new V236-15.0 MW wind turbine tested there. This new turbine has been developed for offshore installation world-wide. According to Vestas, no other wind power plant currently in use in the industry has a rotor with a greater surface area. "We're looking forward to working together with the Fraunhofer IWES Institute to perform the necessary rotor blade testing on our V236-15.0 MW prototype, which has a rotor diameter of 236 metres, so we can start series production, planned for 2024, with complete confidence", said Christian Fenselau, Chief of Test and Verification at Vestas.