"Many people remain completely unclear about the consequences of Brexit." 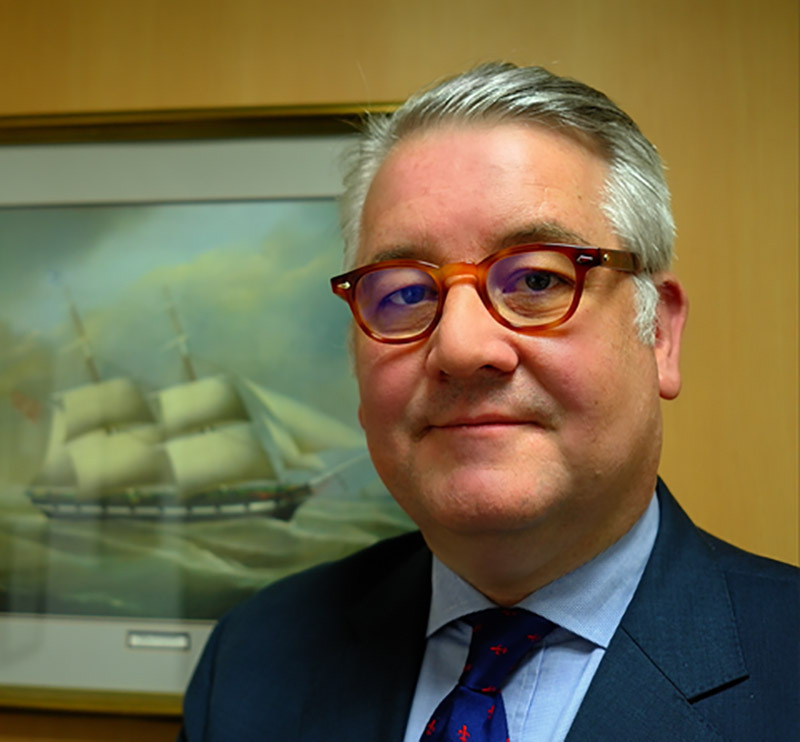 Peter Decu, who is himself from Bremen, is representing the state of Bremen in London, for Bremeninvest. © Peter Decu, Brelon Ltd.

Peter Decu represents Bremen in London. He knows the British industrial landscape and is convinced that many companies are only just starting to feel the full effects of Brexit.

Peter Decu is the Managing Director of the British company Brelon Ltd. and became the London business partner of Bremeninvest, Wirtschaftsförderung Bremen GmbH (WFB)'s business arm abroad, at the start of the year. An expert in the export trade, he previously spent 31 years at Handelshaus C. Melchers GmbH & Co. KG, 23 years of which were as head of its Shanghai office. He is now running the marketing campaign for the state of Bremen with his company, Brelon Ltd., on behalf of the WFB.

Mr. Decu, how would you describe the state of mind in industry, in the UK?
Peter Decu: The response to Brexit here is almost equally divided, reflecting the results of the original referendum. My impression is that many people have not yet realised the extent to which the United Kingdom's departure from the EU and its associated consequences will affect them.

Since spring 2020, the urgency of the Corona pandemic and the emergency measures implemented by companies to combat its effects have shifted the focus in an entirely different direction. My feeling is that some companies are now starting to experience a kind of disillusionment and a sober awakening to the realities of what Brexit will mean for the United Kingdom.

What help can you offer companies in Bremen that have maintained business relationships with British partners over the years and are now confronted by significant problems due to Brexit?

Peter Decu: They will certainly have to face many very different challenges. The administrative burdens and changes resulting from Brexit, affecting cross-border trade, are definitely the greatest challenge. The advantage of using Brelon, as a company, is that we have expertise in finding solutions that can be tailored to meet individual requirements.

What strategic options are available for international companies that have previously supplied markets in the EU from their British base?

Peter Decu: There are of course international companies that used the United Kingdom in this way, before the Brexit referendum, and are now outside the EU, looking in, as a result of the vote for Brexit. Consequently, it is not just British companies, but also these international companies, that are starting to ask if they should relocate to the European mainland. Depending on a company's business model, a wide range of approaches might be taken to that question, and we would like to offer Bremen as a potential place to relocate to, when they are thinking about it.

What options are there for international companies?

Peter Decu: There are no limits to what they could do: they need to find the right solution for them, whether it is a liaison office, the complete relocation of a production plant or some kind of storage facility abroad, for serving the market quickly, or something else. As a location, Bremen has certain advantages, which are worthy of emphasis, and which clearly distinguish it from other providers. The state of Bremen has an experienced business development team which provides outstanding support to help newcomers establish themselves effectively. We are hoping to succeed in finding suitable companies that want to relocate there.

The Corona pandemic is just exacerbating all kinds of problems that were created by Brexit. How can companies become active partners in Bremeninvest's activities?

Peter Decu: Currently, that can only be done digitally. Even so, we can give a partner the feeling that they are actually present, locally in London, and are therefore accessible to others. World-wide, we have generally seen that our old accustomed habits of international business travel will continue to be extremely restricted for some considerable time. Thanks to the corona virus, it is therefore also an advantage to be here, in London, represented by WFB. The corona virus crisis makes a physical presence essential, when serving the market.

Aerospace
Take-off for Bremen: what makes the city a hub for aerospace expertise

The sky is not the limit. Science, production, development and business all agree on this. Aircraft wings, Ariane rockets, Galileo satellites - Bremen is one of the top locations in the international aerospace industry. Five reasons for Bremen's success story.

Learn more
Investing in Bremen
What Britons like Best about Bremen

One year after Brexit, companies are continuing to be severely impacted by the effects of the UK leaving the EU. In Bremen, this means a great deal of work for Ubbo Oltmanns. He is the Chairman of the British Chamber of Commerce in Germany (BCCG), and wants to strengthen economic relationships between the two countries. He knows that Britons and people from Bremen have more in common than many may think.

What effect will Brexit have on companies? Everything you need to know about the new regulations and procedures that affect customs duties and taxes when exporting goods to the United Kingdom or importing goods from there.

Learn more
News
Bremen Advertises Itself in the United Kingdom

In order to attract companies based in the United Kingdom to locate in Bremen and to strengthen mutual trade relations, Bremeninvest, the foreign brand of WFB Wirtschaftsförderung Bremen GmbH, has been active in London since January 1, 2021.

Bremen: Down-to-earth, yet always ready to surprise you. An attractive place to live, a city through which we can move easily and without stress. People from different cities and countries tell us why they fell in love with Bremen and have made their lives here.

Hard facts take top priority when it comes to the choice of location for international or domestic businesses. But the faster we feel comfortable outside the workplace in the everyday routines and culture of a foreign country, the sooner we feel at home. In addition to trade, science – and of course its port, Bremen has plenty to offer when it comes to quality of life.

Learn more
Brexit
Brexit – is your company just another piece of the cake?

When it comes to Brexit it’s not about a hard-fought international contest to attract relocating businesses; it’s about coming together to manage the change, says Andreas Gerber of Bremeninvest in our interview.

Dr Zareer Dadachanji was not going to wait around for Brexit to happen, and has held a German passport since the beginning of the year. He firmly believes that Brexit has no plus points. He and his wife have chosen to locate their new business – Model Quant Solutions – in Bremen, despite the fact that the company’s customers are mainly based in the UK.

Learn more
BREXIT
Brexit is looming – so what does it mean for Bremen?

In June 2016, the UK voted in favour of Brexit, and the exit negotiations are currently in progress. Which industry sectors in Bremen will be particularly hit, and what effect will Brexit have on the Hanseatic city?

Fiona Moore is originally from Burton-on-Trent, near Birmingham, and now works as a freelance translator in Bremen. She fell in love with Bremen in her early twenties. That was back in 2000, but 17 years later she is still as enchanted by the city as she was on the first day. She tells us about settling in Bremen, about her family and about being fortunate to have found a home in here.

Companies wishing to access the European market should be careful about their choice of location. Brexit could result in significantly higher financial and tax burdens for UK-based companies. Under these circumstances, setting up a base on the continent might be a better option. Find out what challenges companies will be facing.

Why have so many IT companies chosen to establish themselves in Bremen? We asked five key business figures and researchers from various organisations to tell us what makes the city such an attractive location for the IT sector.

Keen to remain in Bremen? Then why not combine residency status with self-employment? Manuel Kühn from Bremeninvest’s welcome service knows all about how a start-up could allow British citizens to beat Brexit and kill two birds with one stone.

From initial idea to successful move. Andreas Gerber, who heads up the international relocation team at Bremeninvest, knows what international companies need to do to set up a business in Bremen. Here he tells us about the most important steps on the ...

Going it alone is rarely an easy option. Co-working enables entrepreneurs to work in a shared space and experience the benefits and synergies that come with this. There are nine co-working spaces in Bremen – which one is right for you?

Permits and authorisations, a mountain of applications and a language barrier too. These are just some of the difficulties you face when starting a business abroad. Luckily, an advice centre opened in Bremen in early 2015 that can help you through the jungle: Bremeninvest’s welcome service.

Learn more
Investing in Bremen
World Trade Center Bremen: everything under one roof

Geographical distance and cultural differences make it hard to relocate or start up a company in another country. Luckily, help is at hand from the team at the World Trade Center (WTC) in Bremen. They'll do all they can to make your international business a success.

Language barriers, unfamiliar legal and fiscal systems, qualifications that need to be recognised. There are many additional hurdles that entrepreneurs have to overcome when setting up a new branch or a new company in a different country. Bremeninvest is committed to offering you advice and support from the outset.