Optimising the movement of 95,000 vehicles 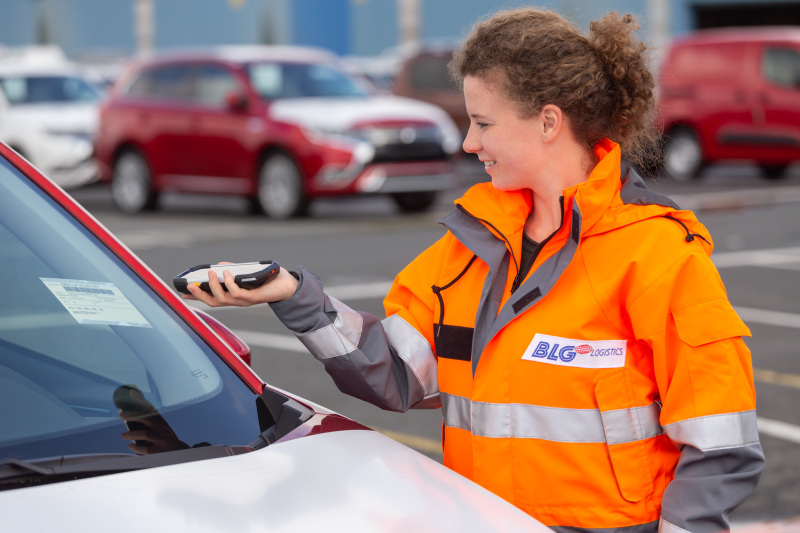 Every vehicle at the AutoTerminal is digitally recorded before it’s moved. Photo: BLG Logistics © BLG Logistics

Vehicles as far as the eye can see: Bremerhaven’s AutoTerminal is Germany’s largest automotive hub. Every year, logistics service provider BLG LOGISTICS moves over two million vehicles through here. The Isabella research project aims to find out how to make the transshipment process even more efficient. One potential solution is to use artificial intelligence.

The working day at AutoTerminal Bremerhaven begins at 6am. That’s when the early shift comes on duty at Germany’s largest vehicle transshipment hub. For first-time visitors, the activity at the site makes for an impressive spectacle. The AutoTerminal is operated by BLG LOGISTICS, covers an area of 240 hectares (larger than 300 football pitches) and has space for around 95,000 vehicles. Every day, 5,000 cars arrive by train alone and have to be moved to their next position at the terminal by BLG drivers.

A week of fieldwork

“Anyone who doesn’t know their way around could easily get lost here,” says Marit Hoffmeyer, a research assistant at BIBA, the Bremen Institute for Production and Logistics at the University of Bremen. She went through the same driver training as all new drivers at the terminal. “It was important to take part in the training and to become familiar with the conditions at the site so that we were able to come up with solutions that will be a perfect fit for the actual situation at one of the largest car terminals in the world,” Hoffmeyer explains. “You also learn the skill of millimetre-perfect parking,” she adds with a laugh. After a week in the field, Hoffmeyer returned to her desk at BIBA, where she is in charge of the Isabella 2.0 research project. In a collaboration between BIBA, BLG LOGISTICS and Bremen software developer 28Apps Software, the project aims to make car transshipment more efficient. The partnership began three years ago with the first Isabella project, which focused on two particular areas. 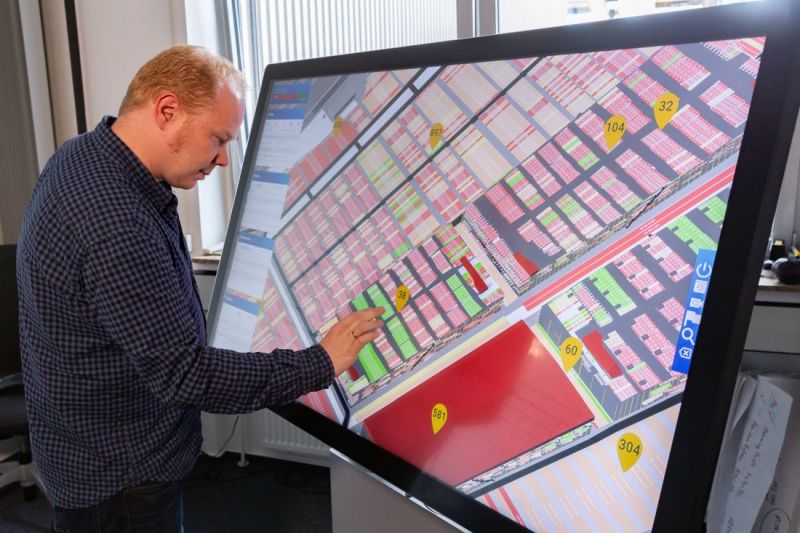 It all starts with a plan

“First of all, you need a plan,” explains Michael Görges, who is in charge of the Isabella projects at BLG LOGISTICS. Among the factors the AutoTerminal planning team must consider on a daily basis are the number of available parking spaces, what sort of work is being planned on which vehicles, and what materials will be required. “We’ve got all that data in our systems, of course, but we needed a tool to get everyone involved around the same table, so to speak,” says Görges. So the project partners developed a multitouch table that provides a three-dimensional representation of the situation at the terminal. The system also allows them to visualise different scenarios from which they can select the optimal variant.

For their next step, the project partners turned their attention to the movement of vehicles around the terminal. This task is performed by 500 BLG drivers, who, for example, take cars from ships to trains, temporarily deposit them in multi-storey car parks or deliver them to one of the technology centres. With the current process, shuttles take the drivers from a starting point, known as P300, to the vehicles, and the drivers transfer the vehicles to their required destination. Then the shuttles take them back to the P300 building where they pick up their next driving job. “This process involves a certain amount of empty trips,” explains Görges. “So the idea was to develop an intelligent control algorithm that will result in a more efficient process.” 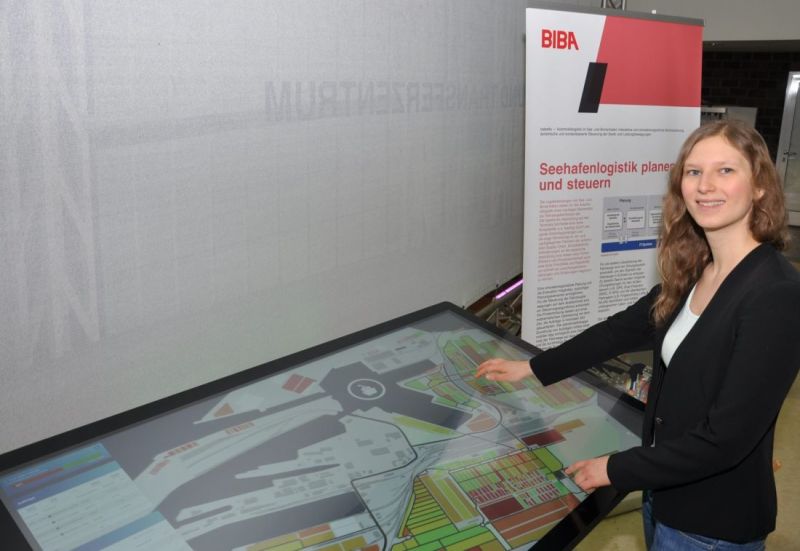 Even rain is a factor

In the new process, codes are attached to the vehicles’ windscreens and scanned with special smartphones by the drivers when they pick up and drop off a car. This enables the system to be constantly updated with the current position of every vehicle. The system also transmits the nearest follow-up job directly to the drivers’ smartphones, saving a number of shuttle trips back to the P300. All sorts of variables have to be factored into this complex development. “I noticed that when it was raining, the drivers needed to get back to their lockers to pick up their rain gear,” Hoffmeyer explains. “Our algorithm takes even these seemingly trivial things into account,” she adds.

The next phase: Isabella 2.0

A prototype of the control algorithm has already been tested at the AutoTerminal. The results were so promising that work is going to continue. While the first Isabella project analysed the movement of vehicles around the site, for Isabella 2.0 – which began in July 2020 –the project partners are also examining the loading and unloading process. This means vehicles will be recorded as soon as they reach the terminal – again using smartphones– while still on whatever carrier they arrive in, e.g. on board a ship. According to Görges, one of the biggest problems will be data transmission. “We’re all familiar with the situation when GPS is working great while you’re driving along in the open air,” the project leader explains, “but then you enter a tunnel and the signal is gone.” Just like tunnels, trains and ships are also made from materials that can block signals. To facilitate data reception under these unfavourable conditions the partners are planning to use the new 5G mobile communication standard, or to set up a local communication network. 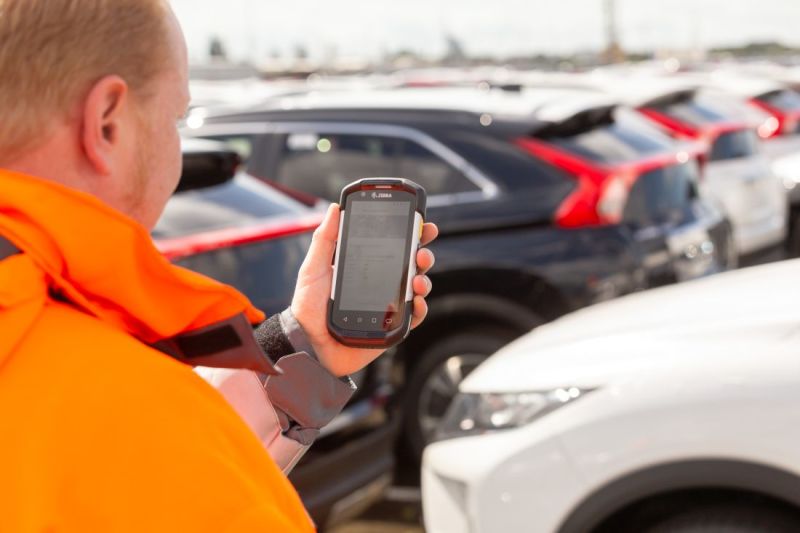 Historical data to feed the AI

And that is just one of the challenges for which the team needs to come up with innovative solutions. Since the control algorithm for Isabella 2.0 is meant to cover all of the terminal’s processes, requirements have increased. “There are so many parameters to consider– from the number of employees to the weather,” Görges says. “That’s why we want to use machine learning to get more out of the control algorithm.” Marit Hoffmeyer of BIBA adds: “We’re teaching the artificial intelligence using historical data.” Later on, the AI will be able to help identify the most promising from a vast number of potential solutions in the shortest possible time. Emrah Gencer, managing director at project partner 28Apps Software, agrees that adding the factor of artificial intelligence will be one of the greatest problems. “The second major challenge for us is going to be digitising those processes at AutoTerminal Bremerhaven that are currently still analogue,” adds Gencer. That includes check-in and maintenance work, for example. And all activities relating to the terminal have to be integrated into the algorithm and the AI control. “That’s when it gets exciting for us as well,” Gencer says. “But we are very confident that we will be able to overcome these problems.”

Plenty left to do for Isabella 3.0

Just like Isabella before it, Isabella 2.0 is set to run for three years, and it is once again supported by the Federal Ministry of Transport and Digital Infrastructure (BMVI) as part of its programme for innovative port technology (IHATEC). According to Professor Michael Freitag, executive director of BIBA, everyone involved benefits from the collaboration: the BLG as user as well as the project partners, who acquire new knowledge and are able to test it. “We also publish our results, so that other car terminals are able to use them,” he adds. And what comes after Isabella 2.0? “At some point the first autonomous cars will start moving around car terminals,” Freitag says. Those will need to be integrated into the intelligent control algorithm. “That could provide material for Isabella 3.0.”

Kathrin and Mark Patel from Bremen are among the most successful designers in their chosen field. Their carpet and wallpaper collections have received numerous awards and the two collaborate with leading manufacturers. The secret of their success? All of their work tells a story.

How do self-driving cars find their way around rural areas? A team in Bremen is using space technology to overcome this challenge for autonomous cars.

Learn more
Startups
Why coworking is the new working from home

Lots of room in the heart of the city – when it comes to coworking, Spaces now rules the roost. Stefanie Lürken, Country Manager of Spaces in Germany, tells us what brings the company to Bremen, and why coworking is increasingly replacing teleworking from home.

Robots in the office and block groves in the kitchen? Our man in Silicon Valley, Tim Ole Jöhnk, has tracked down unknown shooting stars, new technologies and trends from Silicon Valley that could be exciting for Bremen companies.

As anyone who has shopped online will know, the search function in web shops is nowhere near as good as Google search. A company from Bremen is set to change this.

Wherever Urbanscreen appear with their projectors, astonishing "Ahhs" and "Ohhs" are guaranteed. It is good that they also record their works of art on video – we have selected the ten most beautiful.

To the "Ahhs" and "Ohhs"
Creative / Media
In tune with TonePedia

You rarely get the opportunity to try out musical instruments when you buy them online. Bremen-based start-up TonePedia has developed a piece of software that allows musicians to properly compare guitars, bass guitars, amplifiers and effect products online. This saves time and reduces the number of returns and the associated cost.

Photography studios, workshops and professional kitchens are rarely fully occupied round the clock. So why not let others share them? The german start-up Craftspace brings together providers of production spaces with entrepreneurs, small business owners and artists on a single online platform. It’s an arrangement that benefits everyone.

The Chinese designer Haoyu Li combines his German design degree with Chinese business acumen. Now he is opening a design office in Bremen, with the aim of making it easier for Chinese products to enter the German market, and to bring German brands to China.